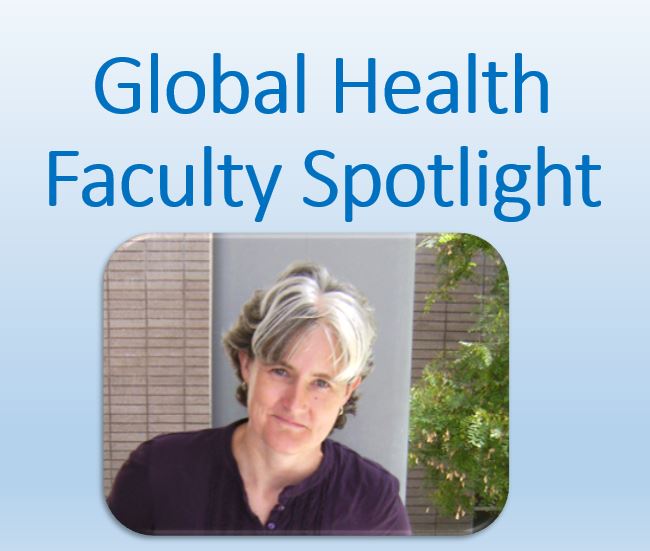 Originally from London, Professor Cathy Gere was a full-time activist in the American Indian movement, anti-gentrification and anti-poverty movements as well as Queer activism in New York and San Francisco. After returning to the UK to complete her PhD in History and Philosophy of Science, Professor Gere worked at the University of Chicago before coming to UC San Diego.

Come see Professor Gere at Quarterly Conversations in Global Health on November 2nd, or take one of her amazing Global Health courses!

What motivated you to become part of the Global Health Undergraduate Program?
Professor Gere believes that the history of medicine has deeply affected health interventions on a global scale. From colonialism to decolonization and neoliberalism, Gere believes that historical conditions are among the most important determinants of health. She also considers global health students the most politically aware at UC San Diego.

Your class HISC116 focuses on the history of bioethics. What do you hope students took away from your course?
Professor Gere hopes to bring across the key message that health and medicine are civil and human rights issues, including not only access to health care but also resistance to abuse by scientific researchers. She considers this to become increasingly important with globalization, as clinical trials are increasingly conducted by American and European pharmaceutical companies on the bodies of people in the Global South.

In light of Quarterly Conversations in Global Health, how do you think gender has affected health historically?

Professor Gere considers gender to be central. Firstly, we have to think about the medical profession itself: Medical education only became gender equal in the 1980s. Medicine is a diverse practice and it is important how all different identities and their intersections are welcomed by the medical field. Secondly, human rights and global health interventions are gendered: Medicine has historically been patriarchal and paternalistic, and it is no accident that the doctor and public health official were seen as father figures. Gender equity, feminism and the Queer liberation movement have been dismantling the power relationships that used to inhere in medical science. We have to consider achievements in the field as a direct result of gender activism. These movements have changed conditions immeasurably and Professor Gere is grateful to live as their beneficiary. She also notes that global public health interventions with women at the center have a startling record of success suggesting that empowering women is the quickest route to improving the health of a community.

Professor Gere will be teaching HILD 30 and HISC 116 again and she is teaching a new colloquium on Darwin and evolutionary theory next term!

What are you focusing on in your own research?

Professor Gere is particularly interested in the history of psychology and neuroscience. She looks at how the sciences of the brain define and redefine what it means to be human.

Advice to Global Health Students: “Know that utopia building is dangerous and keep your feet firmly on the reality of the world that it is. Respect the means as much as the ends, the processes are just as important as their outcomes.”